Martha was nearing the end of maternity leave from her part-time job as a receptionist when she contacted the Working Families legal helpline. Her employer had suddenly demanded that she return to work full-time, in the full knowledge that Martha was unable to do so due to the childcare arrangements for her baby’s older sister. Martha was convinced that this was a ruse to force her to resign, enabling the employer to retain her maternity cover, who was willing and able to work full-time.

The helpline adviser talked Martha through the options for challenging her employer, warning that – given the employer’s actions and intransigence to date – it seemed unlikely that Martha would achieve resolution without issuing an employment tribunal claim.

However, when the adviser explained this would involve paying an issue fee of £250 and – if the claim was not then settled by the employer – a hearing fee of £950, Martha was adamant this was not a practicable option: “I simply don’t have that sort of money – I’ve just been on maternity leave!”

Martha is one of more than 40,000 mistreated or exploited workers who appear to have come to much the same conclusion since 29 July 2013, when the fees came into force. For more than 40 years, the employment tribunal system had provided an invaluable backstop in disputes between individual workers and their employer – a legal remedy of last resort – as well as a more general incentive to employers to ‘get it right first time’.  But in August 2013 the number of new tribunal cases fell off a cliff, and has not recovered since.

However, it was never the stated intention of ministers to bring about any reduction in case numbers, let alone a fall of such proportions. As confirmed by the new government’s recent announcement of a long-promised review of the impact of fees, the original aims were simply to:

Furthermore, these objectives were to be achieved “while maintaining access to justice”.

Measured against these stated aims, the fees cannot be seen as any great policy success. In 2014-15, net income from fees (after remission and administrative costs) was just £4.3 million – less than half the £10 million that, in 2012, the Ministry of Justice predicted fees would generate each year, and a relatively insignificant sum in terms of the Ministry’s total net expenditure of some £7.5 billion. (There have of course been more substantial operational cost savings due to the two-thirds fall in case numbers, but such savings were never an officially stated aim of fees).

Early conciliation by Acas is in fact mandatory for all would-be tribunal claimants, who therefore need no ‘encouragement’ from fees to use the service. And it is very hard to see how fees could, by themselves, improve the “efficiency and effectiveness” of the tribunal process – other than by eradicating a large part of the caseload, of course. Any increased incentive for claimants to settle their claim early (so as not to have to pay the hearing fee) will almost certainly have been balanced out by respondent employers waiting to see if the claimant is willing to pay the fee. And, in any case, the proportion of cases that go to a hearing has always been small (about 20 per cent), so any net impact of the fees on such ‘user behaviour’ will have been marginal at best.

So there is really no need to have established a formal review to judge the fees regime against its original objectives. The review’s terms of reference suggest that Ministry officials will spend more time trying to identify and substantiate any factor – other than the deterrent effect of such prohibitively high fees – that might possibly have contributed to the massive fall in case numbers since July 2013. These include an alleged “historic downward trend” in case numbers – a downward trend that ministers seemingly failed to spot in late 2011 and 2012, when they announced and consulted on their proposed fees regime – as well as the impact from “the improvement in the economy”, “changes to employment law”, and “changes in users’ behaviour”.

However, it is already beyond doubt that such factors do not explain the sharp fall in case numbers from late July 2013. For the only significant (and relevant) change to employment law is the above-mentioned introduction of mandatory early conciliation of all potential tribunal claims by Acas, which did not happen until May 2014. And, while there was a gradual decline in case numbers prior to the introduction of fees, quite possibly linked to improvement in the economy, that decline was relatively modest. From the second quarter of 2012/13 to the first quarter of 2013/14 – the last full quarter before fees – the number of single claims/cases declined by just five per cent.

The ‘historic downward trend’ and ‘early conciliation by Acas’

As the following chart shows, even after factoring in both this modest downward trend  and the introduction of Acas early conciliation – which was intended to bring about a 17 per cent reduction in tribunal case numbers – in May 2014, there remains a substantial difference between the number of single cases we could have expected to see in each quarter, had fees not been introduced, and the actual number of such cases.

There are two potential “changes in users’ behaviour” that might possibly account for some of this missing 40,000 single claims/cases by individual workers:

It is certainly possible that some single claims/cases have been displaced to the County Court. However, all but a few types of claim can only be brought in the tribunal and – while there is anecdotal evidence of some large multiple claimant cases now being brought in the civil courts instead of the tribunal – there is so far no evidence of any significant displacement of single claims/cases.

Although never an officially stated aim of the fees, deterring allegedly “vexatious” or otherwise weak or unfounded claims is the one measure by which some ministers have claimed ‘success’ for the policy of introducing fees. In late 2014, the then Lord Chancellor, Chris Grayling, told the Yorkshire Post that, in introducing fees, the Coalition government was “trying to deal with a situation where it was too easy to go to a tribunal and where employers, often good employers, were easy prey for questionable claims”. And, earlier in 2014, then BIS minister Matt Hancock told the Daily Telegraph that the massive fall in cases demonstrated how “tens of thousands of dishonest workers have been squeezing the life out of businesses with bogus employment tribunal claims for discrimination and harassment”.

However, if all or even just many of the more than 40,000 single claims/cases ‘lost’ to fees since July 2013 were simply “bogus claims for discrimination and harassment” with little if any chance of success, then the overall success rate would by now have risen towards 100%. In fact, as the following chart shows, the success rate has fallen steadily in recent quarters, from 79% in 2013/14, to just 62% in the last quarter of 2014/15. This tends to confirm the view of experienced practitioners that, by and large, it is the ‘high merit but low value’ claims by relatively low income workers that have been deterred by the disproportionately high fees. 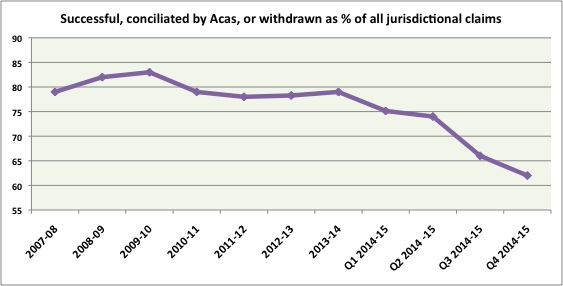 Does any of this matter? Well, clearly it does if you’re one of the more than 40,000 mistreated or exploited workers who have been priced out of justice since July 2013. But it also matters if you think law-abiding employers deserve a level-playing field on which to compete with their business rivals. The employment tribunal system is intended to ensure a more equal power relationship between the most vulnerable workers and their employers, without which – in the words of Winston Churchill more than a century ago – the good employer is undercut by the bad, and the bad employer is undercut by the worst.

Thank to the fees introduced in July 2013, UK employers now risk facing a tribunal claim just once every century, on average. And that is simply a charter for Britain’s worst employers. A government that truly champions business cannot allow this state of affairs to continue.

3 responses to “Access to justice: the long awaited review of Employment Tribunal Fees”