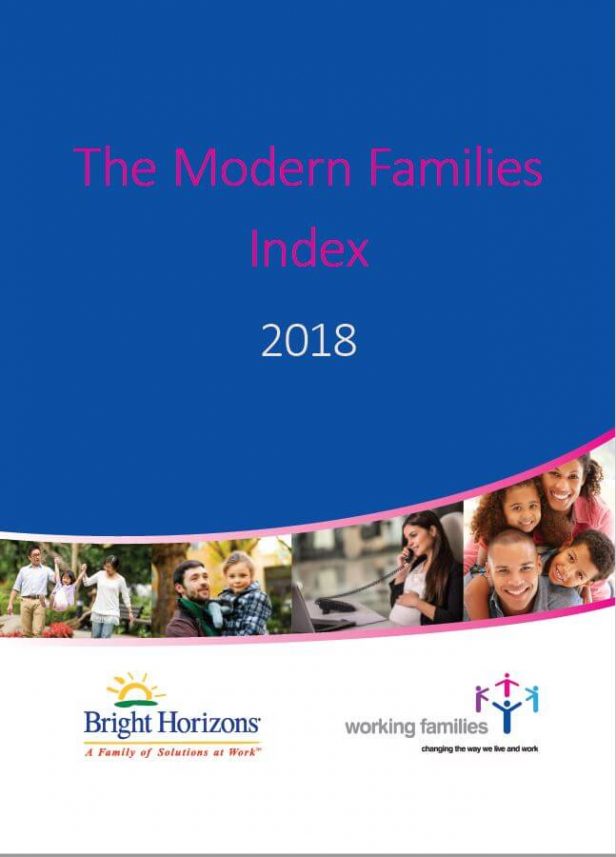 The UK’s working parents are struggling to cope with the strain of overwork – and deliberately stalling and downshifting their careers to reverse the negative impact it is having on family life, according to a major new study.

The 2018 Modern Families Index, published today by work life charity Working Families and Bright Horizons, reveals the stress of the modern workplace is pushing parents to breaking point, creating a ‘parenthood penalty’.  According to the study, many parents are obliged to work far over their contracted hours due to increasingly intense workloads or because they feel it is expected of them.

The study found that:

The figures paint a worrying picture for parents in the UK with nearly half (47%) of respondents acknowledging that work affects their ability to spend time together as a family.  Britain’s long hours culture is also having a profound impact on personal wellbeing, and is listed as a direct cause of tension at home.

The study found that:

Unsurprisingly, working parents are left feeling overwhelmed by the increasing demands of the modern workplace – a third said they feel burnt out all or most of the time, with more than half identifying work as their main cause of burnout.

However, parents are taking significant action to address this. When asked, as part of the study, what they have already changed in their working life for family reasons:

The right to request flexible working – introduced to enable those in work to better balance the demands of work and home life – hasn’t made the difference envisaged for many parents because they are unable to access it (46% of parents, the majority of whom would like to, did not work flexibly; and fewer than half – 44% – felt that flexible working was a genuine option for mothers and fathers in their workplace).

“For mothers and for fathers, becoming a parent looks like a bad career move.  Because the norm for people who want to get ahead is still to show up early, leave late and be on email out of hours – and parents have less time to give, putting them at a disadvantage.

“Parents are responding to the pressures on them by acting – deliberately stalling and downshifting their careers. With more than 11 million working parents in the UK, our economy can ill afford this ‘parenthood penalty’. Our findings should be a wake-up call for UK plc.

“We need a more widespread, genuinely flexible approach to work. But on its own, flexible working is not enough if all it delivers is the flexibility to manage a bumper workload.  We need human-sized jobs that allows parents to fulfil their labour market potential and give families back the time together they need to thrive.  This should be central to the government’s forthcoming review of its right to request flexible working legislation.”

“The Index highlights the UK’s long hours culture is putting severe strain on family life in the UK. Many parents are working unsustainable hours to make ends meet, returning home stressed and exhausted.

“There is great opportunity for families, employers and government to work collaboratively and find successful solutions which enable working parents to thrive both at home and in the workplace. We have seen fantastic examples of leading employers already addressing this important issue, however for those yet to do so we urge them to take action sooner rather than later. Families must see these in practice and embedded at all levels to feel confident in creating a work-life balance that truly works for them.”