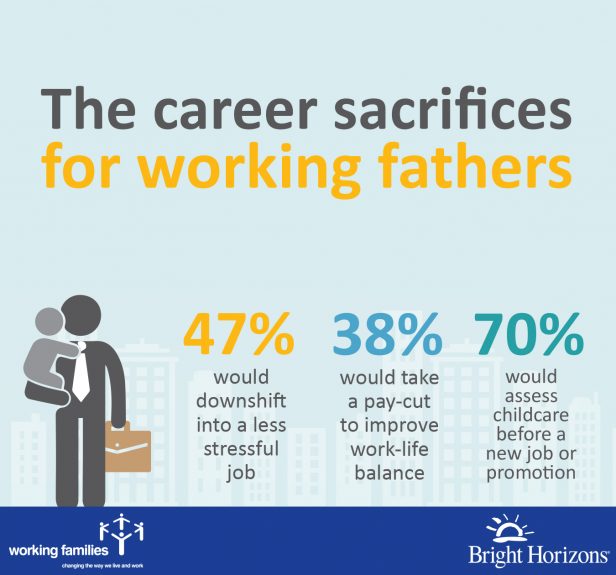 The UK is running the risk of creating a ‘fatherhood penalty’ – as fathers consider stalling or side-lining their careers to find roles they can better combine with family life, according to a major new study.

The 2017 Modern Families Index, published today by work-life charity Working Families and Bright Horizons, captures a broad picture – of fathers wanting to take an active part in childcare and of workplaces failing to adapt and support their aspirations.

Family is the highest priority for fathers. A quarter of fathers that took part in the study drop their children at school or nursery every day; with just over a quarter (26%) collecting them more than half the time.

Seven out of ten fathers work flexibly to fulfil their caring responsibilities. However, for half of the fathers we spoke to their work-life balance is increasingly a source of stress.  A third of fathers feel burnt out regularly and one in five fathers are doing extra hours in the evening or weekends all the time.

The study identifies workplace culture in the UK as a key problem. Fathers say they work extra hours because this is the only way to deal with their workload and that being seen to do long hours is important where they work. Tellingly, twice the number of fathers compared to mothers believe that flexible workers are viewed as less committed and that working flexibly will have a negative impact on their career.

For many fathers the workplace is unsupportive of their aspirations for a better work-life fit.  For nearly one fifth, their employer is, at best, unsympathetic about childcare, expecting no disruption to work. At worst they say they wouldn’t even tell their employer they had childcare problems – for fear of being viewed negatively. It’s telling that a whopping 44% of fathers have lied or bent the truth to their employer about family related responsibilities that ‘get in the way’ of work.

But the study found seven out of ten fathers say that they would consider their childcare needs before taking a new job or a promotion. Fathers are making the same considerations and face the same barriers to their career progression that mothers have faced for decades simply because they have become a parent.  The evidence is parents are feeling the pressure:

The study suggests that this risks creating a ‘fatherhood penalty’ – with more fathers compromising career-wise, following a career that is below their skill set and reducing their earnings.

The study suggests this risk isn’t going away – with these considerations being particularly pronounced for millennial fathers:

“To prevent a ‘fatherhood penalty’ emerging in the UK – and to help tackle the motherhood penalty – employers need to ensure that work is designed in a way that helps women and men find a good work-life fit.  Making roles flexible by default and a healthy dose of realism when it comes to what can be done in the hours available are absolutely vital.

“A game-changing first step would be government creating a new, properly paid, extended period of paternity leave – sending clear signal that government recognises the aspirations of modern fathers and is serious about tackling the motherhood penalty that blights the working lives of so many women.”

“It’s clear that the reconciliation of work and family life is now a priority for both mothers and fathers.  It is impossible to overstate the positive impact of an understanding and supportive employer – one that adapts to its employees’ needs so that they can progress in their careers. Leading employers are those that protect their employees from parental penalties and provide optimum work and care arrangements.”

In March 2016, the Women and Equalities Committee published a report of its inquiry into the Gender Pay Gap which found that sharing care equally between fathers and mothers is the key to reducing the Gender Pay Gap. Following this, the Committee has today launched a new inquiry into Fathers and the Workplace and is asking whether fathers are being failed by workplace policies. The Committee will be taking written submissions via its website until 1 March 2016.

“The Modern Families Index shines a much-needed light on the experiences of British fathers in the workplace. Many fathers want to take a more active role in caring for their children and our Committee’s inquiry into the Gender Pay Gap last year found that sharing caring responsibilities equally between mothers and fathers is the key to reducing the Gender Pay Gap. However, the Government’s flagship policy of Shared Parental Leave is likely to have little impact as it is predicted by the Government to have a take-up rate of just 2-8%.

“We are now launching a new inquiry into Fathers and the Workplace to look at whether fathers are getting the support they need in the workplace to fulfil their caring responsibilities. We look forward to hearing from Working Families and others as we conduct this Inquiry.”

Some further data from the report: