Productivity accounted for 73 per cent of UK growth 1998-2007, yet this has stalled since the recession and is 16 per cent lower than it would have been…Management quality in particular has been found to be so important to raising productivity that it has been estimated to explain between 10-15 per cent of the gap in productivity between the US and the UK.

Confederation of British Industry ‘A Better Off Britain’

At JP Morgan Chase, 84 per cent of employees rated their area’s productivity as good or very good if they had a manager who was sensitive to their concerns, as compared with only 55 per cent of employees whose manager was not. A more empirical statistical study examined the extent to which employee use of alternative work schedules, including job sharing, flexitime, compressed workweeks and part-time work, affected a firm’s profit rate, which is calculated as real operating income as a fraction of sales in a given time period (Meyer et al., 2001). Giving workers the option to take time off when a family member was sick or to work from home were both associated positively with firms’ profits (although job-sharing arrangements actually had a slight negative impact on profits). Profits may be enhanced indirectly if workers value the provision of sick leave so much that they are willing to accept a compensating differential for it, but few employees actually use it. Profits also might be boosted indirectly to the extent that productivity is sustained by the subsequently reduced job dissatisfaction and stress. Workplace flexibility is defined as “the ability of workers to make choices influencing when, where, and for how long they engage in work-related tasks” (Hill et al., 2008). Its potential benefits for workers improve individual productivity indirectly, via health (Butler et al., 2009; Grzywacz et al., 2008; Grzywacz et al., 2007; Halpern, 2005; Jang, 2009) and the promotion of better work/family reconciliation and balance (Boushey, 2008; Jang, 2009).

“A recent analysis of 18, mostly European, Member countries of the Organisation for Economic Cooperation and Development explores the degree to which longer annual hours have been associated with per-hour productivity at the national level, since 1950. It finds that the responsiveness of per hour productivity for a given increase in working time is always negative. Not only are there decreasing returns on added working time, the returns in the form of added production diminish more rapidly for longer working times. When annual working time climbs above a threshold of 1,925 hours, a 1-per cent increase in working time would lead to a decrease in productivity of roughly 0.9 per cent at the threshold and a fully proportional decrease of 1 per cent past the threshold of 2,025 hours (Cette et al., 2011).

In the countries of the European Union, in 2001, the gap between household actual versus desired working hours averaged 11.8 hours per week, varying between 15 hours at the higher end (the United Kingdom and Ireland) and seven hours per week at the lower end (Spain and Luxembourg) (Väisänen and Nätti, 2002). It is more often the size of the gap between desired and actual work schedules as opposed to the number of hours per se that affects a worker’s job performance (Krausz et al., 2000; Hill et al., 2006).”

“The evidence demonstrates that there is a strong and compelling business case for flexible working:

Falling absenteeism and higher retention leads to a reduction in costs – 65 per cent of employers said flexible working practices had a positive effect on recruitment and retention thus saving on recruitment, induction and training costs.

Greater loyalty amongst staff – 70 per cent of employers noted some or significant improvement in employee relations.”

Hours worked does not equate to work done, accommodating how people work most effectively can lead to large productivity gains

For the countries for which data are available the vast majority of people work fewer hours than they did in 1990 and it seems that more productive—and, consequently, better-paid—workers put in less time at the office. The graph below shows the relationship between productivity (GDP per hour worked) and annual working hours: 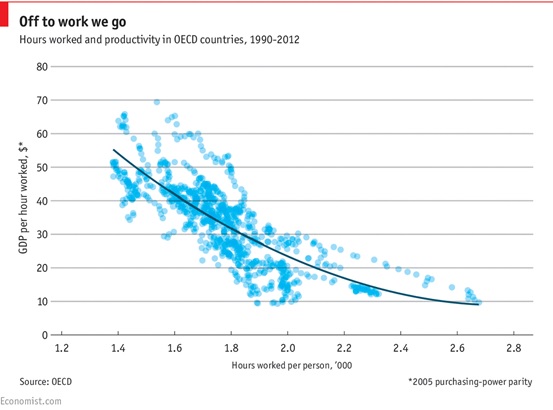 The Economist: ‘Get a life’