In 2019, Working Families celebrated 40 years of support for working parents and campaigning for flexible working for all.

In 1979, what was then the Job Share Project and later New Ways to Work (NWW) employed its first paid worker – Adrienne Boyle – to produce three guides to job-sharing for employees, employers and trade unions. Soon after – in 1980 – a group of mothers met in Clapham to discuss the problems of going back to work and childcare and formed what was to become the Working Mothers Association (WMA). In those days working mothers and those working flexibly felt sufficiently unusual and isolated enough to need their own support organisations but, as the 80s wore on, employers increasingly recognised that they needed to offer more to recruit and retain the female workforce.

WMA changed its name to Parents at Work (PaW) in 1994 to reflect the needs of both parents to spend time with their families. Both NWW and PaW published a number of ground-breaking publications during the 90s, while continuing to support working parents, collaborating with sympathetic employers and successfully lobbying policy-makers for change.

In 2003, PaW and NWW decided to combine forces to “change the way we live and work” and merged to form Working Families. Today, we hope parents and grandparents and all those who care for family members or friends will join our campaign for a working world which works better for all of us. 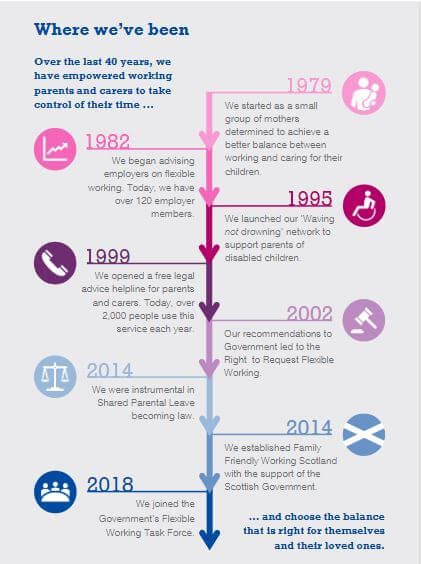